I have moved to Typepad. Please make new bookmarks for this blog at:

So, for days and days I have not been able to upload pictures. There are some work arounds (from the blogger help boards) but I've also been busy with the kitchen redo and visiting my sister.

But I have been looking into Typepad and I think I will be switching soon. It costs money, but I'm guessing when you pay money, there is CUSTOMER SERVICE!!

But I don't know when I'll switch over as we have lots more work being done on the house next week....so many distractions!!

Blogger is having issues with its image uploading software. So I'm a bit hamstrung to blog!

Hopefully it will be up and running soon....

Well, I guess it's All Saints Day now... 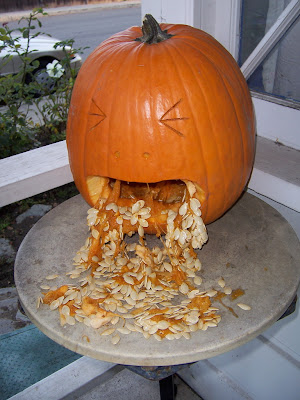 We heard a non trick-or-treating grown up walk by the front porch and laughing at it, telling his friend to check it out.

It Came From Under The House!

The old dead pipes -- that's the cold water pipe from the shower. 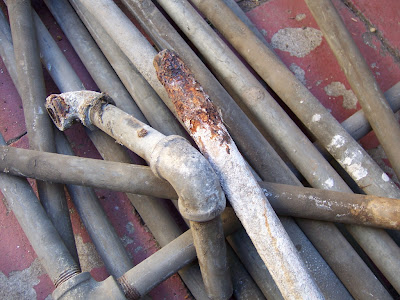 Sorry if you are reading this over lunch, but here is the inside of the shower pipe: 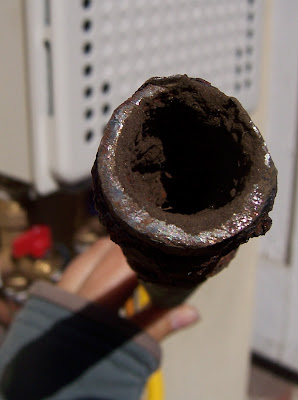 And a closer, though blurry version. Maybe it's better blurry so you aren't so freaked out. 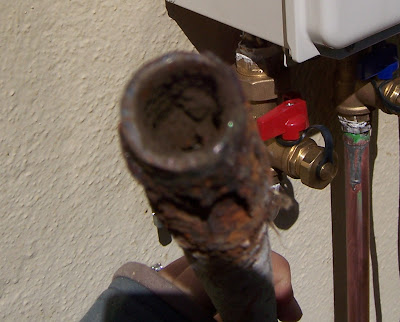 Just showered in our old shower with new pipes, new showerhead, new faucet handles, new water pressure. It's crazy awesome that you can turn on the water, then if you want a smidge more hot, you just turn the handle a smidge more and you get some more hot and even more pressure! In the old days it was bascially one setting for hot and if you wanted more hot, you turned the cold down. Water pressure remained the same at barely more than a strong trickle.

I'm so happy. Nevermind that there is much plaster patching to do...WE HAVE NEW PIPES! WE HAVE WATER PRESSURE LIKE NORMAL PEOPLE!

I saw this on Travis' site. She got it from Annika. You copy the list then bold the ones you have seen. Adding notes to a few was my idea... 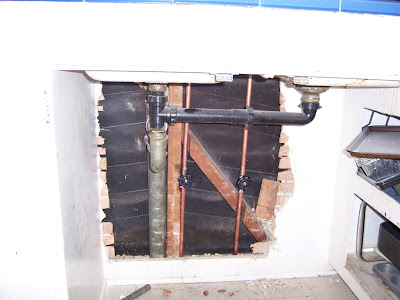 Oh and I guess we have some patching to do....

Out With The Old

It's good that you only get to look at the insides of your old pipes when they are being replaced with bright shiny new copper pipes. I mean YIKES!
This one is from the laundry hook up: 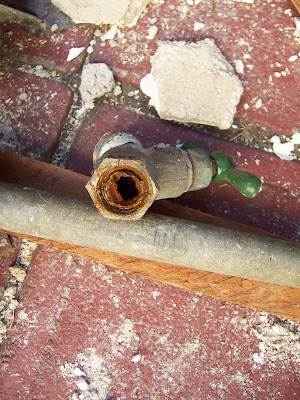 This is from the kitchen: 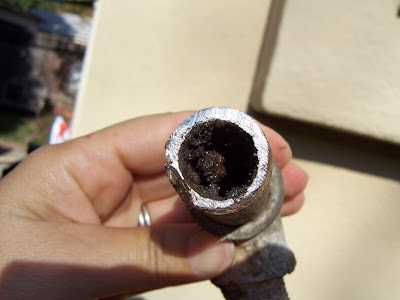 Look at the tub spout! Blech! 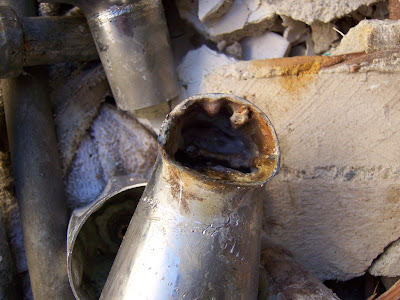 Let's see a close up on that hideousness! 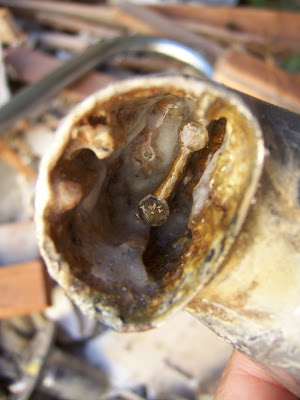 And that cold water shower pipe: 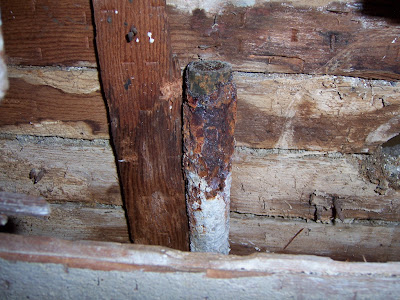 Talk about Just In Time!

The plumbers opened the wall to get to the shower/bathtub pipes. Check out the pipes on the cold water: 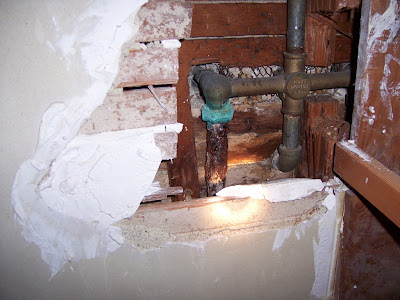 Holy crap! That was gonna blow and soon. (click for even bigger horror.)

My Very Own Guitar Hero

You know we have a Wii. We have a few games. But now. Oh boy. We have GUITAR HERO III!! 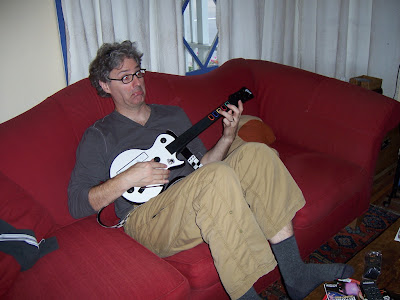 He wanted to be sure you saw his stats. 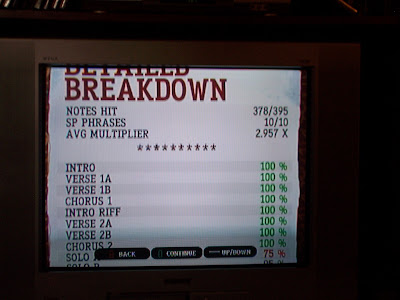 I got up a little earlier today than normal because the plumber is coming shortly to start redoing our pipes and I wanted to do my walk and shower, etc before he comes and shuts off the water. I haven't been out in the morning for a sunrise walk in a long time and it was so lovely and refreshing. The sky was amazing, red golds, yellow golds, and all the clouds kissed with colors in all directions. (I'm sure the smoke from the fires helped, but I'll take the slimmest of silver linings where I can get it.) I'm glad I was up to see it.

The continuing adventure of Kurt and Kulia as we redo bits of our kitchen. Part of this saga is getting our old galvanized pipes replaced with copper. (Don't worry, we are getting professional help with this portion of the show.) The plumber is also removing the old water heater and we got a new-fangled (but not in Europe) tankless water heater! The plumber delivered it and hung it yesterday in preparation for Monday's big New Pipes day.

Here's the new heater outside: 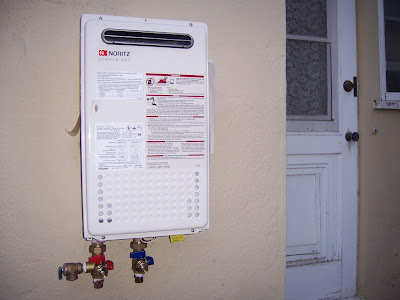 And here are the AWESOME safety graphics that come with it! 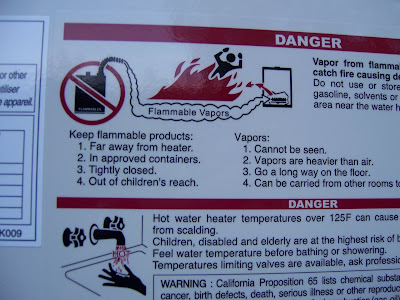 You can view my full set of safety graphics on flickr right here. Enjoy.

Have you been watching THE WAR on PBS?

It's brutal and moving and uplifting and depressing.

We were watching Episode 4: The Pride Of Our Nation and it was mainly about D-Day (June 6, 1944) and the Allied invasion of France. One of the survivors was talking about his experience and how he and his older brother both landed on Omaha beach, the most frakked up of the invasion spots that day. This gentleman's brother didn't survive and he said that he would have rather lost his arms and legs than have lost his brother that day. The scene faded out and Kurt got up to go to the kitchen. We had already finished dinner so I wasn't sure why he was getting up. I said, "what are you getting?" and he said, "I need a drink."

And yet we (the national "we") are At War. Doesn't feel like it at all. Times are different, politics are different, the world is different. But guess what? War is just exactly the same. What's that saying? War is Hell.

How Do You Complain About Your Mailman?

If I get a magazine (which I do at least three times a week), it ALWAYS arrives with a soggy/sweaty patch on the back from the mail carrier. It's kind of gross. How do you complain to their bosses in an anonymous fashion? I'm normally assertive about these things, but the guy knows where I live. He delivers our mail, our bills, our paychecks, our online purchases.

It's a challenge. Any ideas?

I saw this photo on Yahoo and it made think how hard it will be for those homeowners to return. There is going to be some serious survivor guilt to work out. Tough times ahead for everyone. 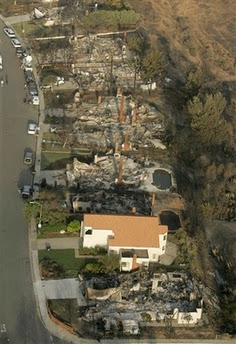 Okay, it's been almost two weeks since I last posted, apologies. I appreciate everyone coming by to check and see if "Julia finally freakin' wrote something new yet!!" Well, here I am. You can read about what I was doing last week in more detail here. The nutshell is I was at my sister's helping her out while she had her first chemo session. My nephew was also in the throws of Homecoming and we went to all his events.

The week before that I was working on posts at Metroblogging Los Angeles. We had a series going about the 25 Most Famous Dead Angelenos. I chose to write about #11: Julia Child and then #5: Harpo Marx. It was a great series and fun to write about such great characters.

This week Kurt and I are already busy trying to get prepared for some re-plumbing of our house. Copper pipes hooray! (I hope our water bill doesn't skyrocket...) And we are getting a tankless water heater to replace our old standard one. That will be interesting. You'll see all about that next week with many photos.

But about the title. Things have been hectic and stressful and scary, but are better now. Recently, thanks to Jacquie, I discovered Trader Joe's Tapioca pudding. Bad news, really. I never remember how much I LOVE tapioca pudding until I have it, but I never remember to buy it. But now, oh boy. I was afraid I'd eat pints of it in one sitting. But as I'm focused on eating healthfully, I haven't bought the pint sized tubs. But then, TJs to the rescue! They make individual servings of sugar free tapioca and it is just about as good. Thanks TJs! (And I would have posted a photo of tapioca pudding, but it really doesn't photograph well.)

So forgive my long absence, and thanks for sticking around. There will be more from here on in! (or is it out?)

My sister sent me an email with hilarious photos of wacky halloween pumpkins. This one really made me LOL: 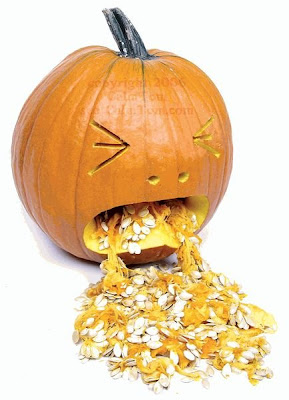 Finally, something else to do with your pumpkin guts...

And this one because I never knew what goatse was until I read Boing Boing. 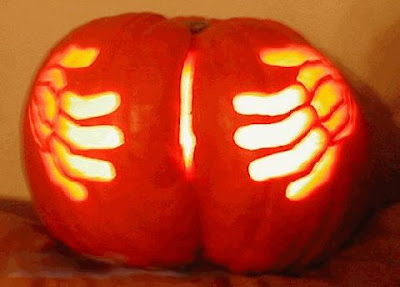 If you've never listened to an episode of the radio show This American Life, I highly recommend you do so. You are missing out on some amazing stories/entertainment/drama/information. I mostly listen to public radio (KPCC and KCRW are number one and two on all my radio dials) and I subscribe to many of the podcasts of the shows on these stations. Podcasting is a dream come true for me because I always wanted a machine that could record stuff off the radio, much like you can record stuff to your tivo (nee VCR). Now I can! I can hear all of Le Show and catch the latest episodes of Wait Wait... Don't Tell Me! which is LAUGH OUT LOUD funny. I usually listen on my morning constitutionals and wonder what people think when they pass me and I'm really laughing.

I've been behind on This American Life because I've been A) out of town and B) not exercising enough. And I realize how much I miss it. Act I of the episode #339 Break Up really caught my imagination. The episode is 29 minutes long and worth every second. There is love, romance, Phil Colllins, heartbreak, sad songs, Phil Collins and a little bit of healing. Please listen to it and tell me what you thought of it.

Ira Glass and his team do remarkable work. Oh and they won a
Peabody Award for their episode Habeas Schmabeas about prisoners being held in Guatanamo.

I have not seen the TV version of the show, but it's in our Netflix Q.

Here's the link to my other blog:


Here's the link to my sister's Health Blog:

BOOK MARK IT!
I'M OUTTA HERE!
I'm Super Annoyed at Blogger...
Blogger Woes
Happy Halloween!
It Came From Under The House!
Aaaaaahhhhhhhh
Dystopian Movie Meme
Shiny!
Out With The Old

(in no order whatsoever) 

This is a Flickr badge showing photos in a set called Safety Graphics. Make your own badge here.

You are one of